Beekeeping has been in the Anderson family for three generations.

A love for the bees and the natural world has always been a significant part of the lives of the father-son inventing team behind the idea, Stuart and Cedar Anderson.

It all started because Cedar felt bad about crushing bees during the honey harvest. He was also sick of being stung and having to spend a whole week harvesting his honey.

“The first idea was simply that there must be a better way, and I’d been thinking about that from a very young age,” says Cedar, who started keeping bees when he was about six. 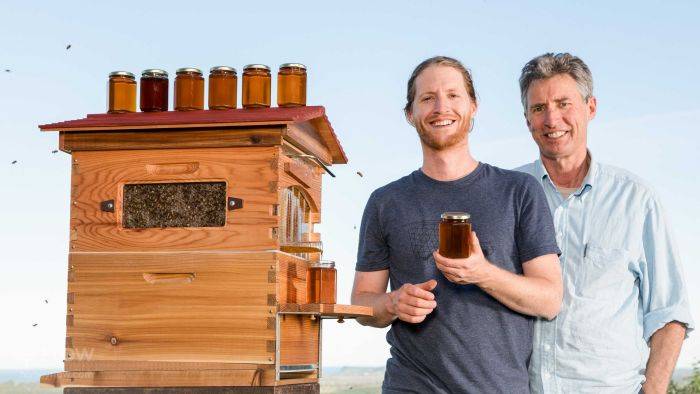 For almost a decade, Cedar and Stu tinkered away in the shed to find a way to harvest honey that was less stressful on the bees – and the beekeeper. They were chasing the beekeeper's dream.

Stu and Cedar would draw sketches and discuss ideas; then Cedar would use his remarkable lay engineering nous to come up with working prototypes.

After trialling many methods over the years, and finding nothing they were really happy with, Cedar developed an idea to split the cells horizontally. While this idea worked, it was soon replaced.

It was while working on that invention, that the real “Eureka” moment occurred.

“I think Dad had had a few strong coffees that morning,” Cedar recalls.

“He held his hands together in a way that resembled a honey cell and then moved them so the two halves were offset.”

“I knew straight away exactly what he was talking about,” Cedar says.

That was the morning the Flow system was born.

Months of experimentation led to a number of prototypes, a lot of trial and error, then friendly beekeepers trying out the designs.

The frames worked. Very well indeed. And it soon became clear that Stu and Cedar had something really special that was going to change beekeeping forever.

With the patents set in place, what the Andersons needed then was capital to fund production and take Flow Hive to the world. They figured it would take about $100,000 to get the moulds made to manufacture the plastic parts for the frames.

With help from a handful of skilled friends and family members and a nail-biting lack of preparation, the Indiegogo campaign was launched in February 2015, with the humble goal of US$70,000.

That goal was reached within minutes of the campaign going live.

Within 15 minutes, the campaign had attracted US$250,000 in pre-orders and was soon breaking Indiegogo’s website and a slew of crowdfunding records.

One of the most successful crowdfunding campaigns in history

... and still the most successful Indiegogo crowdfunding campaign ever.

It was a story that wrote itself, and over the course of the campaign, hundreds of media inquiries flooded in.

The response was far beyond Stu and Cedar’s wildest hopes.

“It was just overwhelming,” Stuart says.

“I think what we tapped into was a yearning in people to be more connected. The decline of bee populations had been on people’s minds, and I think people saw Flow as a sort of drawbridge to connect them with the natural world.”

Toward the end of the campaign, Cedar’s partner Kylie delivered a baby boy earlier than expected. With Cedar out of the picture, the campaign was extended, so he could be around for the final weeks.

The orders just kept rolling in, emails were received faster than they could be read and more of Stuart and Cedar’s friends and family were roped in to help manage the explosion.

Well, that escalated quickly. Now what?
By the end of the campaign on 19 April 2015, some 20,000 kits had been ordered from across the globe, and the scramble was on to fulfil them.

More people came on board and thousands of working hours went into a million decisions on everything from marketing and media, design and manufacturing, to logistics and customer support.

Next began the scramble to fulfil orders — before Christmas! Amazingly, Flow managed to deliver on their commitments only a few weeks behind schedule.

While leaping a succession of supply chain, manufacturing and logistics hurdles, the team were able to develop its internal processes and edge toward being not only a manufacturer and marketer of the most significant beekeeping invention since 1852 but also as a prominent advocate for bees.

Fast-forward to 2020, and there are now 75,000 Flow Hives in use in more than 130 countries. Manufacturing and logistics processes have been optimised and the company now generally dispatches orders within 24 hours. Flow has won multiple awards for innovation, design, marketing and business including Good Design Australia, D&AD White Pencil, Fast Company World Changing Ideas, two medals at Apimondia International Beekeeping Congress and was declared NSW Business Chamber’s Business of the Year (2017).

Now, Cedar and Stuart are at the helm of a company that has matured into not only a successful Australian exporter, but a prominent advocate for bees and the natural world. A global community of hundreds of thousands of people has sprung up around the idea of being kinder to bees and taking better care of our local environment.

Recently, Flow launched a new, limited edition product – a pollinator house – designed as a home for solitary bees, made from upcycled Flow Hive offcuts. Eight hundred units sold in the US and Australia almost immediately, and all the profits will be going toward pollinator habitat programs later in the year.

The company is now a certified B Corp™, which means meeting rigorous standards of social and environmental performance, accountability.

The commitment to raising awareness of how crucial bees are to human survival is real and unwavering, the importance of sustainability, recognition of the interconnectedness of all life on Earth and the broader message of treading as lightly on the planet and with as much love and as little cruelty as we can.

After all, that’s what Flow Hive is really all about.