For more information or to arrange an interview, please email.

What is a Flow Hive?

An invention which has revolutionised the beekeeping industry – the Flow Hive contains Flow Frames, a world first technology which allow the beekeeper to harvest honey straight from the hive without disturbing the bees.

Regarded as the most significant advancement in beekeeping since 1852, the Flow Hive has removed the need for expensive processing equipment making the fascinating world of beekeeping much more accessible. How is it unique?

Conventional harvesting methods involve opening a beehive’s honey super; smoking the bees and brushing or blowing them off the frames; removing one or multiple frames, then transporting them to the kitchen, laundry or honey shed; cutting off the caps; spinning the honey out with a centrifugal extractor or crushing and squeezing it out; filtering out the wax and dead bee bits, THEN taking all the frames back to the hive; putting the frames back; putting the box back together and then finally cleaning everything up!

It’s a long and arduous process, usually done on a hot day, involving lots of heavy protective clothing, sweat, bee stings, and backbreaking heavy lifting. And it’s really rough on the bees. Part of their home is destroyed, and many are killed in the process!

But harvesting honey with a Flow Hive is fast, simple, non-invasive and requires no extra equipment. The process is so gentle – the bees remain safe and undisturbed.

Inside every Flow Hive is three or more Flow Frames located in the modified Flow Super. The frames comprise of a partially completed honeycomb matrix which the bees complete with their own natural wax. They then fill with the cells with nectar, which they evaporate into honey and then cap, as they would with regular comb.

When the honey is ready for harvesting, the beekeeper simply inserts a Flow Key into the top of the frame. When the Flow Key is turned, the mechanism is activated. The wax joins of the cells, previously completed by the bees, crack and the hexagons are split, forming channels. The honey runs down into the trough, out through the honey collection tube and into the beekeeper’s jar – pure, untouched, unprocessed honey.

After a few hours the bees notice the comb is empty underfoot and they chew away the capping, repair the cells, and refill them.

How it all began 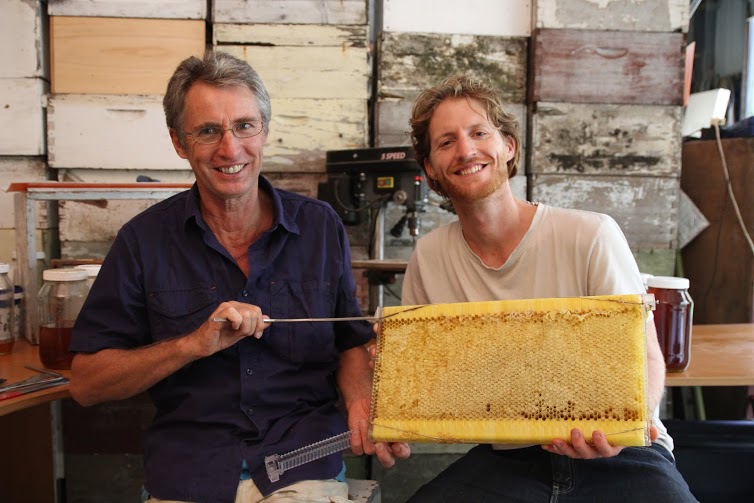 Beekeeping has been in the Anderson family for three generations. A love for the bees and the natural world has always been an important part of the lives of the father-son inventing team behind the idea, Stuart and Cedar Anderson.

It all started because Cedar felt bad about bees being crushed during the honey harvest. He was sick of being stung and having to spend a whole week harvesting the honey from his small, semi-commercial apiary.

“The first idea was simply that there must be a better way, and I’d been thinking about that from a very young age,” says Cedar, who started keeping bees when he was just six years old.

For almost a decade, Cedar and Stu tinkered away in the shed to find a way to harvest honey that was less stressful on the bees — and the beekeeper. They were chasing the beekeeper's dream.

Stu and Cedar would draw sketches and discuss ideas, then Cedar would use his remarkable lay engineering nous to come up with working prototypes.

After trialling many methods over the years, and finding nothing they were really happy with, eventually a “Eureka” moment occurred.

“I think Dad had had a few strong coffees that morning,” Cedar recalls.

“He held his hands together in a way that resembled a honey cell and then moved them so the two halves were offset.”

“I knew straight away exactly what he was talking about,” Cedar says.

That was the morning the Flow honey harvesting system was born.

Months of experimentation led to a number of prototypes, a lot of trial and error, then friendly beekeepers trying out the designs.

The frames worked. Very well indeed. And it soon became clear that Stu and Cedar had something really special that was going to change beekeeping forever.

By the time the Flow Hive Indiegogo campaign was launched in February 2015, the teaser video had gone viral, and was instrumental in Flow Hive becoming one of the most successful campaigns ever launched.

The media interest was staggering, with a feel-good story that practically wrote itself: A father and son both struggling to make ends meet when they finally launch an invention they had been working on for 10 years – a beehive which delivers “honey on tap” – and become millionaires almost literally overnight.

The reality, however, was as the money rolled in, so did the orders – 20,000 of them, with the scramble on to fulfil — before Christmas! Amazingly, Flow managed to deliver on their commitments only a few weeks behind the schedules outlined on Indiegogo.

Fast-forward to 2020, and there are now over 75,000 Flow Hives in use in more than 130 countries. Manufacturing and logistics processes have been optimised and the company now generally dispatch orders within 24 hours. Flow has won multiple awards for innovation, design, marketing and business including Good Design Australia, D&AD White Pencil, Fast Company World Changing Ideas, two medals at Apimondia International Beekeeping Congress and was declared NSW Business Chamber’s Business of the Year (2017).

Now, Cedar and Stuart are at the helm of a company that has matured into not only a successful Australian exporter, but a prominent advocate for bees and the natural world. A global community of hundreds of thousands of people has sprung up around the idea of being kinder to bees and taking better care of our local environment.

In December 2019 (during the UN Climate Change Conference, COP25, in Madrid), Flow joined with 500 companies around the world to accelerate reduction of our greenhouse gas emissions to reach net zero by 2030 — 20 years ahead of the 2050 targets set in the Paris Agreement. Flow’s sincere hope is that we can achieve net zero much sooner than the 2030 deadline.

In 2018, the company gained B Corp™ accreditation, which means meeting rigorous standards of social and environmental performance, accountability, and transparency.

Continuing their dedication towards sustainable practices and pollinator advocacy, in 2017, Flow was proud to offer their first hive – a Pollinator House –aimed towards solitary-nesting bees, project which also supports habitat protection by donating 100% of profits to projects that support pollinators. This project allowed the company to launch a Pollinator Support Program in 2018, which funded 9 community selected pollinator related projects in the USA and Australia. This successful project is now run each year. Flow continues to regularly survey their customers and respond to feedback.

Flow has ensured success by designing the Flow Frames and Hives to suit region-specific hive sizes such as the UK National, and Japanese hive. The company also conducts a Flow Research program that is currently researching Flow Frame use in regions such as Africa and New Zealand.

The company has also established an ambassador program to enable regional champions to speak directly to customers in their locality and support them in their customer experience, and Flow has translated the user-manual into 8 languages to provide a positive tailored experience to their global customer base.

Flow addresses the environment, social and product quality and value concerns of our markets by designing and implementing programs that support and engage beekeeping clubs and organisations that support native pollinators, and offer product bundles that provide quality Hives and beekeeping supplies

For more information or to arrange an interview, please email.

What do the experts think of the Flow honey harvesting system? Canadian beekeeper John Gates, who worked with the BC Ministry of Agriculture for 26 years as an apiculture specialist said: “In 2014 I had the pleasure of testing the Flow Frames. The bees quickly accepted the frames and in less than two weeks had stored and capped about 40lbs of honey.“I must say it was quite exciting to see the first bit of honey appear at the outlet, then make its way down the tube into the jar.”

Michael Bush, author of Beekeeping Naturally and a well-known U.S. beekeeper, said: “It’s not very often something is so revolutionary as to blow my mind.“Saving 20 percent of harvesting labour is not trivial, 40 percent is amazing, 60 percent is revolutionary. But 95 percent – that’s mind-boggling!”

Michael Howes, of Tyagarah Apiaries Australia said: “I put the Flow box on one of my hives, and the bees took to it straight away. The honey came out clean, no wax. The bees just remove the capping and start filling it again. Great system!” Having grown up on a bushland “intentional community” in the Rainbow Region of NSW, Australia, Cedar didn’t have a telly growing up. Instead, he spent his time tinkering and coming up with crazy inventions to delight his friends and family. As an adult, work revolved his other consuming passion, flight, as a paragliding instructor and capturing aerial footage for Greenpeace.

Having been a third-generation beekeeper since the tender age of six, it was during a particularly nasty summer honey harvest that Cedar decided, “there had to be a better way.” Now, Cedar is at the head of Australian manufacturing success story, Flow having shipped more than 65,000 orders all around the world. He lives on the far north coast of NSW with his partner, Kylie Ezart, and their two children.

A long-time tinkerer, Stu has built several houses over the years (including the one in which Cedar was raised, and where Stu still lives with his partner, Michele Wainwright) and co-designed and built an off-grid solar and water-powered electricity supply to serve a dozen homes on the cooperative. He’s also a life-long beekeeper and before the Andersons’ incredible invention became all-consuming, was the director of a not-for-profit community organisation based in Lismore, NSW.

As well as having a hand in the daily decision-making at Flow, Stu is the man on the mic, talking Flow Hive at numerous business and beekeeping conferences and other events, in Australia and abroad. Stu is still an avid beekeeper with a passion for the natural world and a family man with four kids and eight grandchildren.